Well, the first Monday of May has come and gone, and Spring has officially sprung.  The theme for this year’s Met Gala was Camp: Notes on Fashion, inspired by Susan Sontag’s 1964 essay “Notes on ‘Camp'”.  Camp is not something that is easily defined but is generally recognized by its love of over-the-top theatricality and humour. You can find examples of camp fashion in much of Thierry Mugler’s archive or in Viktor & Rolf’s latest collection of meme gowns, but the LGBTQ community and drag culture are largely to thank for today’s camp movement.  Camp is “a love of the unnatural: of artifice and exaggeration” as defined by Sontag in her essay.

The exhibit at the Metropolitan Museum of Art in New York City features over 200 pieces of fashion as well as sculptures, paintings, and drawings from the 17th century through today.  Sections of the exhibit feature work from designers like Virgil Abloh, Alexander McQueen, John Galliano, Rei Kawakubo, Mugler, Bob Mackie, Karl Lagerfeld, and Viktor & Rolf.  Other sections highlight Versailles and queer subcultures of Europe and America from the 19th to the early 20th century.

Without further ado, let’s marvel at a few of my favourite looks from last night’s ball.

One of the evening’s hosts, Lady Gaga, made quite the entrance with her four outfit changes, all by Brandon Maxwell, while en route to the front door.  She arrived in a hot pink gown with a dramatic train.

Her second gown was black, voluptuous and hidden underneath her first gown. Her third reveal was a hot pink curve-hugging gown, reminiscent of Marilyn Monroe, with a super cute Judith Leiber telephone bag. Her final look was a bedazzled bra and panties with fishnets and platform heels. 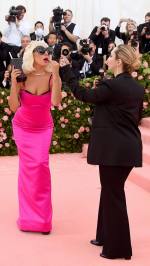 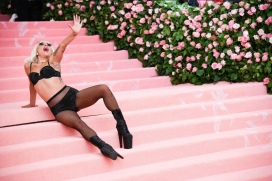 Kim K came through drippin’ in a nude, skintight custom Mugler dress that paid homage to her May Vogue cover look. The creation was Thierry Mugler‘s first in 20 years and Kim prepared by taking corset breathing lessons(!).  For the after party Kim wore another Mugler creation, a blue latex dress with a diamond wig inspired by Cher and blue latex boots. 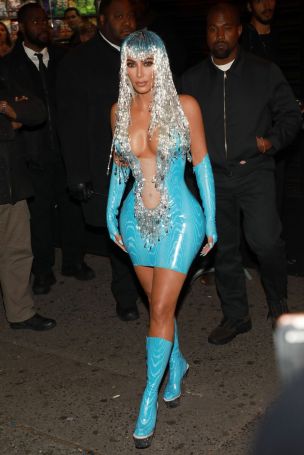 Saoirse wore a dress by one of the sponsors of the evening, Gucci. It was an amazing figure-hugging column gown covered in red sequins and adorned with golden dragons.

The Queen of Supermodels wore a dreamy Valentino Haute Couture outfit with a showstopping feather cape.

I really loved Elle Fanning’s Miu Miu retro flower child look.  The breezy fabric, coral hues, and pastel makeup were reminiscent of a summer day at Woodstock. She also paired the look with a super cute manicure in a matching colour featuring some trendy nail piercings. 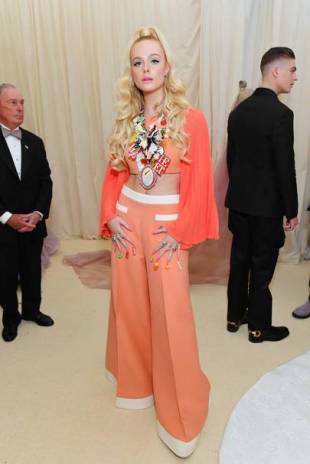 People seem to be a bit divided on whether or not Hailey’s Alexander Wang dress was on-theme, regardless, I think she looked amazing.  I’m a sucker for pink things and the curve-hugging fabric, open back, matching thong, and retro high pony made the whole look even cuter. 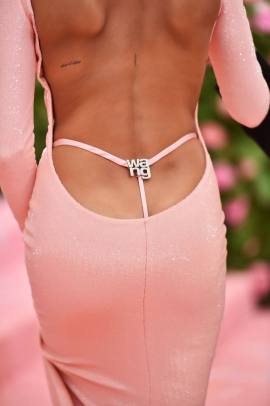 Emily’s sexy Dundas gown and matching headpiece were reminiscent of vintage Cher in her Bob Mackie red carpet and performance looks.  Her glowy makeup was on point and was the glaze on the donut, so to speak.

Dua Lipa made her Met Gala debut in a colourful, voluminous Versace gown with a plunging neckline.  Her classic smoky eye and nude lip paired with jeweled flowers nestled into a bouffant give me vintage Priscilla Presley vibes.

Janelle wore custom Christian Siriano topped with a matching hat(s). She paired the look with a matching Judith Leiber handbag.  The coolest part about this outfit? The eye on her dress actually winks! 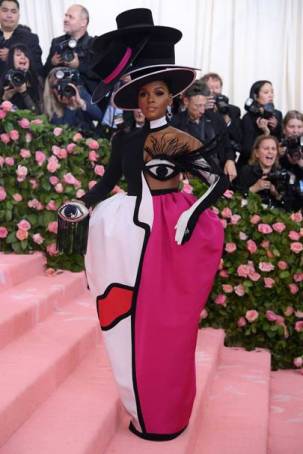 Cardi’s second Met Gala appearance was as showstopping as her first in an oxblood Thom Browne dress.  The custom gown, with coque feathers and ruby nipples(!), took 3,000 hours and a team of 35 people to create.  She completed her ensemble with lace gloves and an embroidered headpiece.

Kacey was a life-size Barbie doll bringing to life the Barbie x Moschino Met Barbie doll with her hot pink bomber jacket gown. Kacey’s attention to detail really completed the look with pink sunnies and a pink hair dryer purse.  She even showed up in a hot pink Barbie convertible!

I might just be hungry but I’m really digging these bedazzled cheeseburger looks.  The Moschino creative director wore a custom cheeseburger jacket to the Met Gala after-party to match his date for the evening, Katy Perry.  Katy wore a fabulous Moschino cheeseburger ensemble with a cute little lettuce dress hidden underneath.  The look was complete with a toothpick beaded cap and amazing cheeseburger Judith Leiber accessories